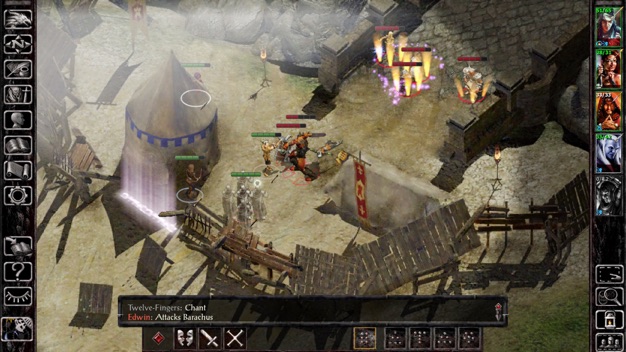 Siege of Dragonspear is an “an epic Baldur’s Gate tale, filled with with intrigue, magic, and monsters” with around 30-hours of gameplay.

Amazingly, despite all the intricacies of the Baldur’s Gate engine and GUI, it is playable on an iPhone. I did have to toggle on the Reveal Details button as otherwise it was a bit hard, but if you want a real challenge you could play without. You can also easily zoom in and out. The one-tap QuickSave button is a blessing.

You start by going through all the usual character customisations of a Baldur’s Gate game: gender, class, alignment and so on. The only slightly glitchy area was the colour sliders: the results in the sprite didn’t quite seem to match the colour of the slider position.

If you haven’t played BG before, you’re probably best off starting with Baldur’s Gate so you have some idea of who your other party members are at the start, but it doesn’t really matter.  (For those of us who “accidentally-on-purpose” left Imoen behind at the first opportunity, she’s back in all her annoyingness). If you do play BG on iOS first, you can import your character from there.

Combat is the typical real-time but pause/autopause-as-often-as-you-like scenario. There are lots of quests and lots of loot.