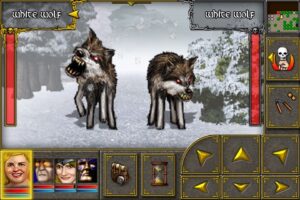 This is a brilliant game, it’s probably one of the best RPGs out there. It’s similar to The Quest, but with slightly more colourful graphics, and is party-based rather than single player. Combat is turn-based but works very quickly, fluidly even, it’s almost like fighting real-time. You can’t return to previous chapters once you move on, which is a bit of a shame for completionists that missed something earlier on. Depending on the success of the game, an expansion could be on the way.