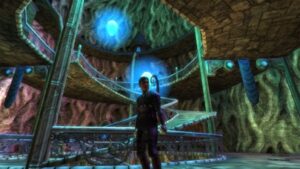 The sequel to the no-longer-available Aralon: Sword and Shadow, Aralon: Forge and Flame is another high-end 3D open world RPG with plenty of exploration, quests, items and weapons. You can play as male or female, and a fighter, Mage, Ranger, Rogue.

The interface is better than the the first game and it’s well balanced, without the need for grinding. Most of the sidequests (and there are fewer than in the first game) are fetch-quests and kill quests but still enjoyable.

You can choose between First Person and 3rd person view and there’s a Day and Night Cycle. You can also travel through a dimensional portal to battle demons in the Netherworld.

“That which once was, may yet be again. From ash and sorrow, a hero shall arise, wreathed in shadow, forged in flame. . .” -The Chronicles of the 3rd Age

The Throne of Aralon sits empty, and the noble families of Callaheim struggle to control the future of the kingdom.