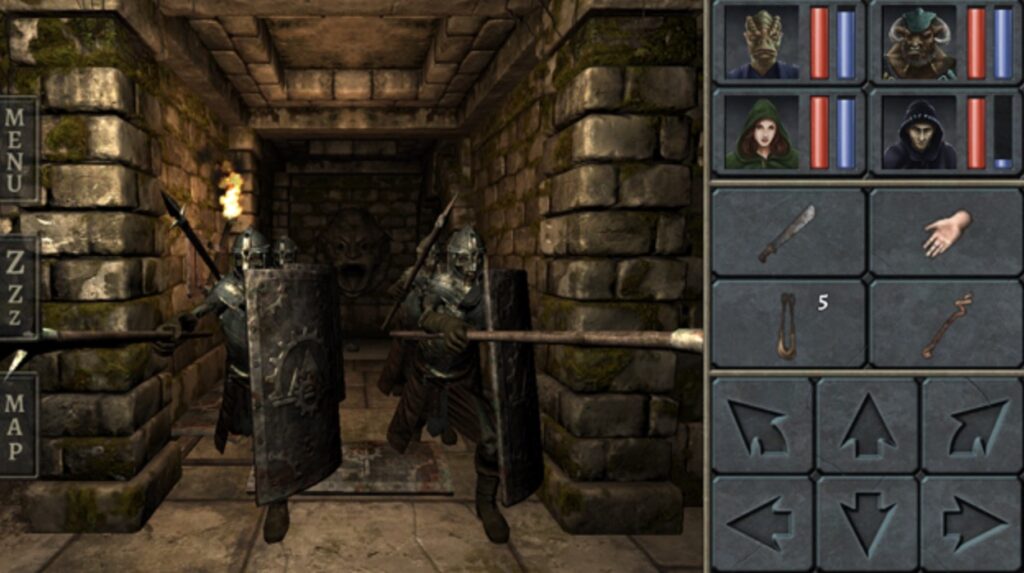 A super fun old-style dungeon crawler with the sophisticated enhancements that modern graphics technology enables – “an oldschool heart but a modern execution” – Legend of Grimrock is a beautifully crafted and also very challenging game. It looks like a classic turn-based RPG (similar to The Quest) but it’s actually real-time/action.

You play as a party of four adventurers, excited to the secluded Mount Grimlock, who have to escape down various levels. There are endless hidden buttons (different styles on each level), levers, pressure plates, traps and so on. Plus enemies.

A group of prisoners are sentenced to certain death by exiling them to the secluded Mount Grimrock for vile crimes they may or may not have committed. Unbeknownst to their captors, the mountain is riddled with ancient tunnels, dungeons and tombs built by crumbled civilisations long perished now. If they ever wish to see daylight again and reclaim their freedom the ragtag group of prisoners must form a team and descend through the mountain, level by level.

In terms of party creation, you can choose races, classes, skills and traits. Mages don’t seem to be able to do much in the early game. I picked Fire to invest in which I now think was a huge mistake, I’d recommend picking Ice if anything. Arm your back row party members with a couple of spears that you’ll find early on.

And don’t feel bad about using a game guide. I honestly have no idea how someone figured out many of the puzzles. It may be slightly easier playing on a larger screen format (eg iPad) but on iPhone I can’t always easily see some of the things that are there, such as pressure plate diagonally in front through a grate.

If there’s anything I’d change in this game it’s food, which is always the most dreary of RPG mechanics to have to constantly keep an eye on, but it’s not too bad. The characters seem to consume at a reasonably slow rate. I’d also love a portrait mode.