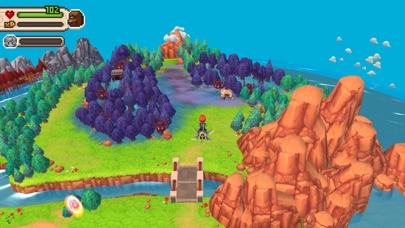 I wanted to love Evoland 2 because I adored the original instalment, Evoland, but unfortunately the sequel is as much of a platformer as an Action RPG – and it’s hardcore platforming at that. Combined with what felt like very glitchy controls on the iPhone X, it ended up unplayable.

If you have a device (or miraculous fingers) on which the controls function better, then Evoland 2 is a solid game with an interesting story.  It’s apparently compatible with MFI controllers. Once again you get to play in different graphical “eras” of gaming which neatly  correspond to time periods that the heroes travel to. I actually found I preferred the “present day” polished retro sprites to the 3D “future” graphics.

From 2D RPG, through 3D vs fight to a shooter, a trading card game and more you’ll get your fill of jumping from a game genre to another, never bored.

Sadly, I never managed to get to the shooter or trading card levels, so can’t comment on what they’re like. The puzzle sections were generally good, and the underwater sections were fun. Just the platforming ruined this for me.

If you want to get all the collectibles, as well as the powerful sword asap, then you’ll want to follow a walkthrough. This breaks the immersion for me, but Evoland 2 is a very, very linear game. The sense I get, not having finished, is that you may not be able to revisit previous areas to collect the things you missed. And when it comes to the finding the limited pieces of ore to make the most powerful weapons and armour, that’s obviously vital to collect.

There is no real customisation of characters in terms of choosing skills/stats, that’s all automatic. The equipment is also limited, there are only a few different things to get.

It might have been an idea for the devs to provide some kind of “Easy Mode” for iPhone players, similar to the “Slow Platform” function offered in 9th Dawn II.   I admit I’m not great at platforming, but I can usually get through. With Evoland 2, I spend literal hours on single sequences of bouncing mushrooms, and eventually realised it just wasn’t fun. All I felt was a sense of dread and boredom at the next set  (I got as far as about half way through Windy Valley). The game also crashed repeatedly when I was making all these attempts – it didn’t crash at other times, just after each 50 or attempts/reloads of the platforms.

Many otherwise positive reviews make the same complaint, such as this one from Lytesabre on the App Store:

The story so-far is nice, my only gripe is the controls. They are brutally horrendous. The movement circle really needs to stay put, as I have to take my finger off a lot any slight tap over there resets it’s position so I miss the button way to much, the attack button is so small I miss it frequently as well. As the game progresses much finer controls are needed to not rip out your hair redoing platform areas and puzzles.
Please adjust the controls and this will be a very much more rewarding experience

Ultimately I can only recommend this one to platforming fans and those really skilled with platformers, unless you’re getting the desktop version. Otherwise you’ll just struggle and suffer.