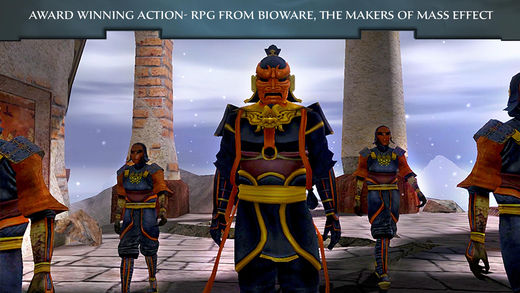 Jade Empire is a game that I first played on Xbox, and greatly enjoyed. Set in ancient China, it’s a 3D RPG with martial arts combat elements (fighting is realtime) and some good fighting style customisation.

You play as the student of Master Li. Suddenly there’s an attack, he’s kidnapped, and you’re off to solve the mystery and defeat the Lotus Assassins, building up your fighting skills along the way.  There are lots of quests, and the gameworld is quite beautiful. There’s also an interesting morality mechanic.

Jade Empire will feel familiar to anyone who enjoys Bioware games (such as KOTOR), but it is somewhat more linear. It’s section-by-section, without being able to revisit earlier sections. It has the look of a game that should be open world, and you can run around each section and get a 3D, immersive experience, but you’re never really free to travel and quest where you want.