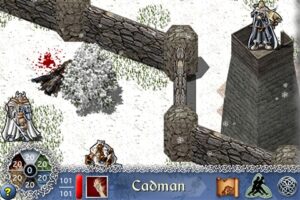 The Pantheon Cycle: Shrouded Aspect is a turn-based strategy game with RPG elements, set in ancient Celtic lore. It does focus on combat rather than role-playing. It includes 32 different scenarios with branching paths. The huge amount of skills (200), weapons and classes give strong replay value. Characters perma-die if you lose them during a scenario, but you can replay the scenario (before ending) without penalty to try not to lose them.