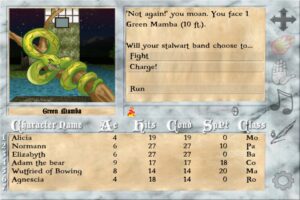 Silversword is a party-based classic D&D-style RPG. It has been compared to The Bard’s Tale and Wizardry. You can create a party of up to seven characters: six are pre-generated for you but you can delete them and recreate your own. There’s also a full in-game manual.

The game is already quite feature rich but the interface is quite text heavy: most of the screen is taken up by your party list, and the action/map screen is somewhat small. Movement is retro 3D (similar to Dragon Bane II or Princess Demelza) and there’s a great overview map which would be nice if it toggled with the lower character info screen. Migration of saved games from the Lite version to the Full version should be possible. The developers plan to keep developing the gamein future.