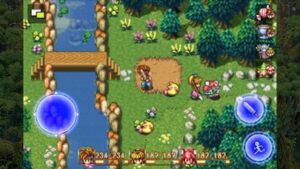 An iPhone/iPad update of the original 1993 Japanese game Holy Sword Legend 2, Secret of Mana is an action RPG offering dozens of hours of playing time. Control is passed between the three player characters: Randi, Primm and Popoi. It’s been compared to Across Age and Zelda. It features an eight-way direction pad and a ring-command menu system, allowing players to access items without switching screens. With combat you can hit repeatedly for low damage, or let the energy bar fill up and deal high damage. You save at inns, and there are auto-saves between each area. Unlike the original version, there’s no co-op multiplayer.