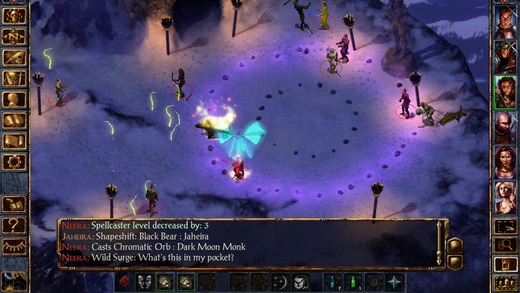 Baldur’s Gate: Enhanced Edition is the highly anticipated remake of the 1998 RPG Baldur’s Gate and its 1999 expansion pack Tales of the Sword Coast. Baldur’s Gate is a party-based game, with a lot of character interaction including romances, and extensive character customisation based on AD&D 2nd edition rules.

You don’t need to know Dungeons & Dragons to play and enjoy this game, nor do you need to be a hardcore RPG player, however a bit of reading up on THAC0 will help. Combat is pausable real-time, which means that as the game progresses, you may have to consider party combat strategies and tactics. Baldur’s Gate is involved and has a lot of depth, but it isn’t overly complex and the learning curve is worth it. There are plenty of side quests, spells, armour, weapons etc: it’s as fully featured as an RPG can get without delving into crafting and similar.

Baldur’s Gate: EE is available for iPad as well as Mac, PC and Android, with Linux promised as well – a consideration if you’re a modder and thus might prefer the desktop version. There is a potential cross-platform cloud save version coming, but no idea as to whether that would work with modded game saves. Downloadable content is also planned, and Overhaul Games is also working on Baldur’s Gate II: Enhanced Edition, for release in 2013.