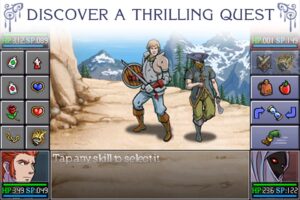 Ash is a classic JRPG or Japanese RPG which has enjoyed rave reviews. As with most JRPGs, you take on the role of pre-defined characters, rather than creating your own hero. The game features quite a lot of well-written dialogue and has a big focus on story and character, and it’s actually well-done and very interesting. The developers have also provided a downloadable soundtrack and strategy guide and world map on their website, which is always useful. Grinding is not as heavy as in a Korean RPG, but is often needed to level up to get past a certain point. On the upside, the end of the game gets easier rather than impossibly hard. The game features both touch-to-move and an optional D-pad. Healing at inns is free if you are broke. Ash 2 is also being planned.