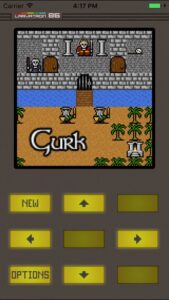 Gurk III is an ultra retro 1980s style RPG (Gurk I and Gurk II aren’t available for iOS). It’s a very big, long game with over 50 dungeon levels, 125 creatures and 200 unique items. For retro fans there are also 20 original songs scored in 8-bit synth emulators. You start by choosing your characters, for which you have to pick one warrior and one mage. You have four pre-defined names/classes for each: Knight/Barbarian/Amazon/Mercenary, Marksman/Ranger/Rogue/Assassin, Wizard/Druid/Conjurer/Necromancer.

You only get one save slot but you can save anywhere. There’s a huge world map and minimaps in dungeons. When you die you lose your gold but not your gear or XP. Combat has something of a chess-like strategy, as where you position your characters really matters. Summoning gets quite critical later on in battle.