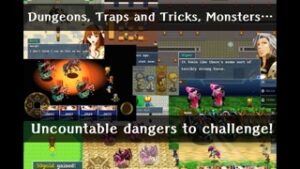 Eve of the Genesis is a well done JRPG with the typical pre-defined characters and cut-scene combat, and very nice, bright graphics. The reflections of the team members in water when they pass over bridges is a particularly nice touch. But what really sets Eve of the Genesis apart is the huge amount of post-main plot gameplay – there are areas you can only reach, and items you can only collect, after you finish the main story. Attempting to complete all the item collections is almost like a second game in itself.

The game really hides secrets away, so you will probably want to peek in a few forums (it’s out for Android too and their forums are helpful) to figure out where things are. The game is pretty well balanced, even the final battles aren’t too hard, though apparently the post-game play gets tougher. Grinding is mainly needed to buy the next round of gear upgrades.