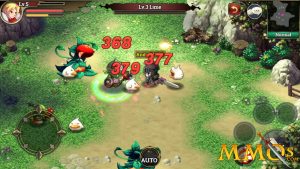 What is grinding? Briefly, it’s performing a highly repetitive task that earns you gold, items or experience. Think of the South Park kids spending weeks killing boars in World of Warcraft just to make their characters stronger.

Grinding is one of the categories I’ve included in the info of games features on RPG-site. Grinding can be useful (even fun) and it can be a loathsome, game-ruining abomination.

Good grinding
As an optional activity, grinding can be a very useful, elective method to build up your character or collect money for some nice weapon or armour. In a limited way, it can also be useful to level up a character to add a couple of skill points or get a new spell. Games that do this well include The Quest and its expansions. There’s no need to grind, and you’ll have to sleep for a week for monsters to respawn, but it’s a useful way to earn a bit more gold and maybe pick up some extra items.

Bad grinding
Bad grinding involves the forced repetition of an uninteresting task to actually be able to progress in a game. When grinding is not optional, but obligatory, it means that a game has been cheaply designed, since grinding greatly increases a game’s length but offers no meaningful or interesting extra content, or that it has been poorly balanced. Zenonia is a classic example, and one of the few games I’ve not bothered to finish for this reason, though I did enjoy the early sections and still recommend it. The early-to-mid game is fun. You kill stuff, you find items. Then suddenly it’s like the progress hill juts up into a vertical precipice, with you right at the bottom. Monsters become insta-death. Any new equipment you find is ten levels too high for you to use. You can’t advance, you can’t do anything, you have to go back and re-kill easier foes for literally hours on end just to make any progress. This is not fun. This is not good design.

Zero grinding
Some games, due to their form or design, have zero grinding – for example because monsters don’t respawn. This can be a problem in itself: if a game is too linear and you mess up your character’s skill point distribution, or use too many potions early on, you can really struggle in later, harder stages. This effectively self-nerfs your character and you may even have to restart. Or there is the situation in a game like Arvale Short Tales: Varju the Druid where the player keeps levelling despite reaching an effective power cap (damage and defence are limited by the best equipment available) but monster level and powerfulness keeps scaling. This was more of a glitch in design, it wasn’t intentional. But you’re effectively no longer able to grind for rewards while random monster encounters keep grinding your level and theirs higher.

So what we’re really looking for is a game that: