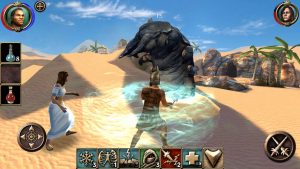 Different people have different expectations for what a role playing game should be.

Generally speaking there are several main elements which help define the genre. Wikipedia lists seven characteristics but that can be simplified into four main areas.

1. Quests
A main story and quest to follow, preferably with a good range of optional sidequests, and an interesting world to explore.

2. Character
Being able to customise your character, with various classes and skills and stat points.

3. Combat
The main mechanic of the game, where you fight monsters to earn gold and experience.

4. Loot
Different items that enhance your character, from weapons and armour to magic items and potions. Shops where you can buy and sell items. Crafting enhanced items.

Interestingly, some of the games that seem on the fringes of the RPG genre – for example the puzzle RPGs – can actually adhere more closely to these characteristics than other, more conventional games such as action RPGs. Chaos Rings doesn’t have towns or sidequests, but Puzzle Quest features both. Arvale Short Tales: Varju The Druid – a classic RPG – doesn’t allow any character customisation, but Choice of Broadsides – an interactive fiction adventure – does.

As a result, some RPG fans may get a more fulfilling experience trying some of the fringe games rather than sticking solely with the core titles.